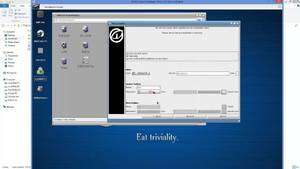 “An emulator for various CPUs that supports virtualization”

A review of QEMU for Windows by Felix Cheng

As virtualization software, QEMU is certainly a contender for one of the fastest.

The application can emulate operating systems under Windows such as Linux, FreeBSD, Mac OS X and others while not bogging down the system in many cases.

QEMU enables cross-compilation and debugging on foreign operating systems right from the Windows desktop without the need of special software.

QEMU supports the emulation of different processors and emulations and performs well with both 32-bit and 64-bit systems including older and outdated processors like the IBM PowerPC that Apple used to deploy extensively. It also supports ARM processors that are common in some brands of mobile devices.

Usage of QEMU and success among different hardware setups varies but emulation of most optical drives is support as are USB devices.

This download is licensed as freeware for the Windows (32-bit and 64-bit) operating system on a laptop or desktop PC from computer utilities without restrictions. QEMU 5.1.0 is available to all software users as a free download for Windows 10 PCs but also without a hitch on Windows 7 and Windows 8.

Compatibility with this processor emulator software may vary, but will generally run fine under Microsoft Windows 10, Windows 8, Windows 8.1, Windows 7, Windows Vista and Windows XP on either a 32-bit or 64-bit setup. A separate x64 version of QEMU for Windows may be available from Fabrice Bellard.

Screenshots of QEMU for Windows (1)